It is such a pleasure to host this guest blog.   One of the joys of social media is connecting with people completely outside one’s usual orbit.  John Paul Bernett is an amazing fellow; writer, modeller, carer for his beloved wife  (and editor),  Beverley.  I am  impressed by his sincerity , his irrepressible optimism and his gentle humour. He writes  Gothic horror  fiction,  and is immersed  in the Steampunk culture.  Now I have never read a horror story,  well apart from  Dracula and The Day of the Triffids.  It took me ages to work out what Steampunk  even meant. However, I  consider John Paul a  friend. When he started posting on Facebook  about his ‘waistcoat project ‘  I  became completely engaged, and asked him to write a piece about it for my website. I’m sure you will enjoy his sewing challenge as much as I did. 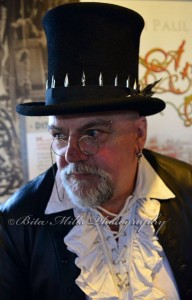 Let me begin by saying I’m a writer, not a seamstress. The thing is I have one of those god shaped physiques – shame it’s Buddha!

So here is my problem; my manly shape makes the most expensive clothes look like old rags on me. I am certainly not model material, but I had a brain wave; why don’t I make my own clothes that will fit me?  It shouldn’t be hard.  I have a long body, short legs ,the equator for a waistline and a 22 inch neck. Not what you would call off the peg.

My decision was made.  I’m making my own, so I was internet bound for my first pattern.  The only thing my first search found was a Sweeney Todd waistcoat – I ordered it and two days later it arrived.  A quick look over the pattern and I thought,  ‘I can do this.’  However, my early confidence was soon quelled when I read the instructions. Top stitch this, line that, wrong side of left front – right side of back trim. Obviously these patterns are made for people who can sew. A mere trifle, I am an intelligent person, I can work this out……NOT.

With the pattern under my arm I went to Leeds market to see my friend and seamstress, Laura. I asked questions, she answered them in a language I could understand (made it simple for me) and we picked the cloth. She showed me what was used to stiffen the material and got together all the stuff I needed. With my pattern under my arm and a bag of goodies in my hand I ran home. I say ran home but in reality I walked. I say walked; what I mean to say is I went to the fish and chip shop, had my lunch and then meandered back to my apartment.

I cut out all of the separate bits of pattern and placed the relevant pieces onto the corresponding cloth and cut precisely were I was told to cut. 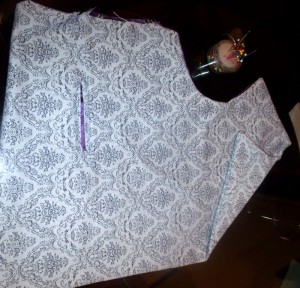 This was getting exciting. The instructions  stated it would take 8 hours to complete,  not the three and a half weeks it actually took but I put that down to technical issues that were out of my control.

I joined part one to part two and had immediate success Yeh!!!  Watch it Mr Armani,  you have a new competitor.

NOT ALL SMOOTH STITCHING

One of the hardest looking things to do was the collar, so in true British Bulldog fashion I put that bit to one side for later and got on with the easy bits.

By now I was making the pockets.  I couldn’t make head nor tail of the instructions, so I watched a Youtube video and found a very simple way to make them. Confidence was high so I hit Facebook, promising photographs later that evening of my finished masterpiece. I hit the post button and felt quite pleased with my little self until my lovely wife Bevie said,  “Can you smell burning?”

‘Indeed I can’, said I as I watched the plume of smoke rise from my sewing machine.

My machine was dead and I had just announced to the world I would have pictures of my finished garment that very evening.  My Grandad came to mind as one of his old sayings seemed quite revelant;   ‘You can’t put the horse droppings back in the horse’,  or how he would have said it “Tha can’t put shit back in t’oss”.  He had a colourful way of saying things my Grandad.

The next day I took my sorry machine to the guy in the market who fixes sewing machines.  He told me it would take a week to sort out, and sort it out he did.  By the time I had retrieved my machine I had been to see Laura again and she had shown me how to do the collar. 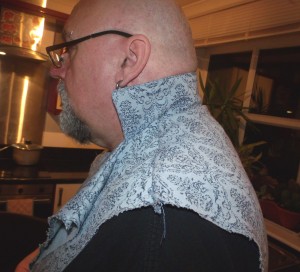 It was all systems go as I sewed the collar to the back and then the front to the back. I then turned it all the right way round and low and behold it looked like the picture on the front of the pattern! It was now time to learn how to make button holes – to the Youtubemobile,  Batman.

I learned how to mark and make button holes, I sewed on the buttons, hand-stitched the side seam left open from pulling it the right way round, and I was done. 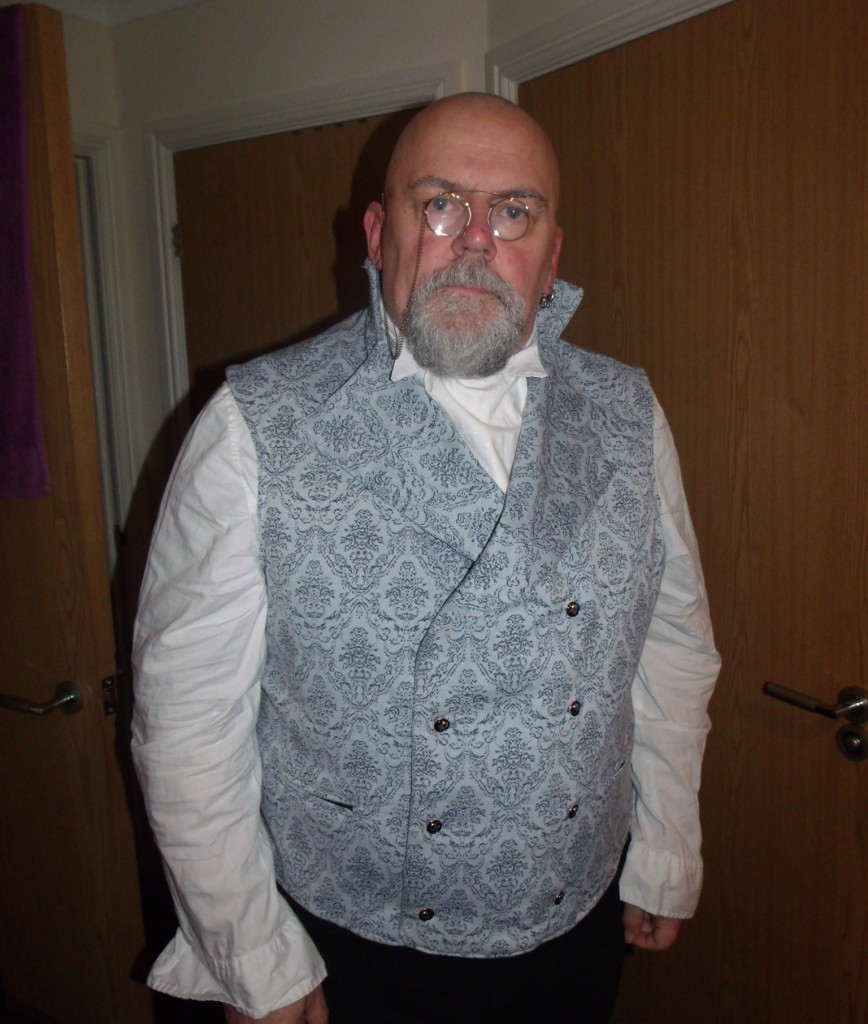 There were one or two mistakes when I saw a better way to do things, but then had to unpick what I had done when I realised why it had to be done the way the pattern said.  But all in all I rather enjoyed the experience, and will definitely do it again.

Oh yes!  The little fat lad from Hunslet was now a fashion icon.

THANK YOU SO MUCH JOHN PAUL…YOU LOOK TERRIFIC. HERE ARE SOME LINKS TO JOHN PAUL’S BOOKS. I MIGHT EVEN  FIND THE COURAGE TO TRY ONE MYSELF.

www.reaperauthor.com
They are also available on Amazon.