ARE MINTIES NUMBER ONE?

It would be hard to name  Australia’s most iconic  lollies   Fantails? Jaffas?  Life Savers? Minties must surely be a contender.

They were invented in 1922, by  Sydney’s James Stedman, son of Australia’s first  large-scale confectioner.

The factory was located in  Rozelle. Just look at that stockpile of unformed Minties in the backround!

Mintie wrappers are  printed with little cartoons depicting the mishaps of life, which the pleasure of eating Minties promises to  alleviate.   This is referred to in a dictionary entry for the Mintie;

Used allusively to refer to a source of comfort or consolation.

“We hope there was a Mintie  waiting for him in the dressing room after this morning’s match.”

It was marketing genius, as customers  appreciated  the bonus of the cartoon. Some very well known illustrators  have provided the artwork, including James Bancks (creator of the cartoon character Ginger Meggs) Norman Hetherington (the artist behind Mr Squiggle) and Syd Miller, who did the artwork for Chesty Bond. 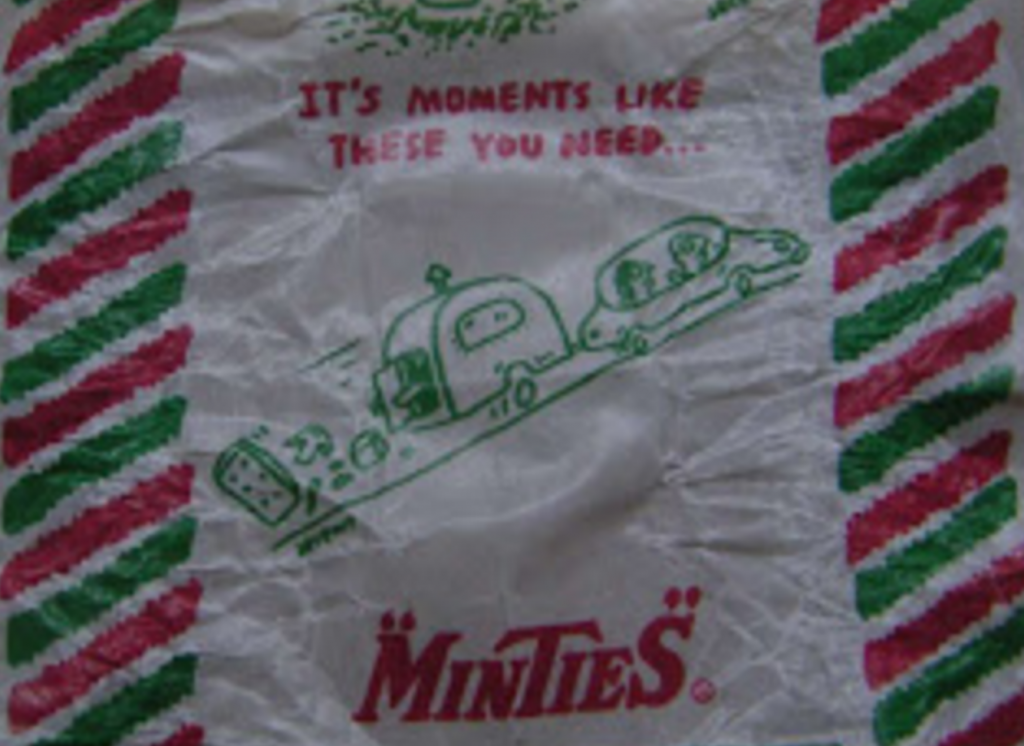 The catch-phrase entered the lexicon.  And yes, the wrappers still feature the cartoons. Below is an example from a packet I bought  very recently.

CAREFUL, MINTIES CAN BITE BACK!

Mind you, chewy Minties became famous for causing mishaps of their own, ie; removing fillings…..or even a tooth.

I was delighted to come across the old photo  below. A dedicated  Mintie van distributing the sweets to stores around the nation.

Soon after Minties  appeared on the market they were promoted at Sydney’s Royal Easter Show;

Minties, aptly known all over Australia as The Universal Sweet, have five stands at the Royal Show this year. The main stand, which is situated in the Industrial Hall, is a great pyramid of Minties tins about 30ft high, surrounded by chasing lights. The top section of the pyramids of tins is lighted from within, looking like a giant, glowing coal. Last year over 100,000 Minties bags were sold at the show…..each purchaser of a  6d  bag receives a wonderful miniature of a straw hat, which is a source of great merriment and is already in great demand.

During WWII  all the available Minties were sent overseas to the troops. The tin below is a survivor  from 1940 and  features war related cartoons

While police were investigating a suspicious death in 1951, three Minties were found with cyanide secreted inside small cavities.  Mrs Betty Fleming had died after drinking a beer laced with cyanide.   Her husband, Thomas Fleming, was charged with murder after it was revealed he had been having an affair.  Were the doctored Minties more evidence of the husband’s guilt? Or did his dead wife take her own life and plant the sweets in an attempt to frame him?

On a lighter note, Minties were  a staple at Tupperware parties and bridal showers in the 1960’s and 70’s.   After guests had eaten  the lolly there was a competition to tear the waxy wrapper into the longest strip possible.  It was amazing what some people managed to achieve.  Come to think of it, this would keep kids out of mischief for ages on a rainy day. I tried my hand at it this morning, but my effort failed miserably.

It seems the Minty wrapper competition was also useful on long car drives.  The photo below is courtesy of Marissa McGregor. The car is an EH Holden.

WHAT IS YOUR CHOICE AS AUSTRALIA’S  (OR THE COUNTRY YOU LIVE IN) MOST ICONIC  SWEET?   MAYBE IN THE US, IT WOULD BE HERSHEY KISSES? AND IN THE UK……A BULL’S EYE?