WRITING  TO SANTA IS A SERIOUS BUSINESS; AN  ILLUSTRATED ESSAY BY EDITOR DES…. ER, THAT’S ME! 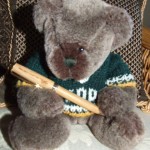 Well here is a letter  to Santa written by a little Australian  boy called Paddy, exactly one hundred years ago.

Who do you think Paddy was? (see answer at the bottom of this story). He was only  six years old, so we can certainly excuse a few spelling mistakes.

Now do you think a fellow aged 18 and ¾ is too old to write to Santa? I don’t.  My guardian  Pauline Conolly often  says I am immature and childish, which I think means ‘young at heart.’   So I thought I’d give it a go.

If you make the envelope look pretty it has more chance of catching Santa’s eye.  I read that in a book.

I kept asking Pauline to take me up to the post office, but she said she was too busy (*#!#*!#). When we finally got there it was closed! For heavens sake!

I had to take my letter back home, and it will probably be too late to get to Santa at the North Pole.  Because look how far it is,  and that’s just from Sydney.  Little Blackheath is miles further.

We  all had to go to Sydney next day. Pauline said  maybe I could post it  down there, but I didn’t think that would be the same thing  at all.

Well we drove  back up the mountains to Blackheath as quick as we could on Tuesday. It was ten to five when Dr Bob parked the car behind the Post Office. I shot out of the car like a bullet.   And  YES…I made it!!

All the letters  end up in Mr Santa’s letter box in the North Pole. His helpers sort them out.

All I can do now is wait and hope. If you happen to read this Santa, I would also like a lot of lollies (and ciggies…ha ha, only joking).  I have been quite good  all year in my opinion.

Have you ever written a letter to Santa? And did he bring what you wanted?? Pauline said she asked for a pony once, but she didn’t get one. Just as well…she wouldn’t have looked after it properly. If it wasn’t for dear Dr Bob I’d starve.

Here is a funny letter written by a young  fellow called Bobbie, in 1937. It was addressed to Mr Santa Claws, South Pole, Russia. Haha, not very good at geography young man !. Anyway, it said;

Dear Santa Claws, Plese will you bring me a eyrephane wot flies hi and a bycycle plese. I want one bad and I have been a good boy you ask mum. Thanks I will go to sleep Bobbie.

Crikey, the spelling was not the best either….I know that’s harsh, but well….I’m an editor.

∗ANSWER TO MY PUZZLE – THE LITTLE BOY CALLED PADDY  WHO WROTE THE LETTER WAS THE FAMOUS AUSTRALIAN WRITER MR PATRICK WHITE.