WARNING – THERE ARE PICTURES OF SNAKES IN THIS ARTICLE.   ALSO,  I MUST POINT OUT THAT SNAKES ARE VERY INOFFENSIVE.  THEY NORMALLY ONLY BITE WHEN CORNERED, OR WHEN SOMEONE IS TRYING TO KILL THEM. THEY ARE NOW PROTECTED IN AUSTRALIA, AS THEY CERTAINLY SHOULD BE.

Being bitten by a snake was one of my biggest fears when growing up on a Tasmanian farm.  My mother worried too. Whenever we disappeared through the door on one of  our adventures she would automatically say, ‘Be careful of snakes!’   There were two stories she told us that entered my psyche and remain to this day. One was about a young woman  who went to the toilet in the bush during a picnic and was bitten on the bottom. She was  too embarrassed to tell anyone, and  thus…she died.  The other story was that someone picked up a rolled piece of bark from a gum tree and there was snake inside. I  therefore assumed there was a snake in every piece I saw, and still do. I live at a property called The Gums, so I have some anxious moments clearing up after storms. Thanks Mum.

To be honest, we had very few close encounters on the farm. After my sister and I went swimming in the dam one day we found  a tiger snake curled up in our clothes, but by the time we  called my father it had vanished.

And then there was the time my mother spotted one disappearing under the house beneath our bedroom.  I’m afraid she lured it out with a saucer of milk, and in the absence of Dad this sweet, gentle lady  despatched it with a double-barreled shotgun. How she knew snakes liked milk I had no idea, but when I saw this truly creepy article I realized she may have been right.

One morning last  week Mrs Jack Jones, of East Kempsey brickyards, got a shock of surprise, on bailing up her cow, to find a large  brown snake  sucking the animal’s udder and holding on by a coil of its body round the cow’s hind leg (says The Chronicle) The snake escaped, and with it the usual morning bucket of milk, for the slimed-over  udder was found to be sucked absolutely dry.

I’ve just remembered that in the wonderful Henry Lawson story, The Drover’s Wife, the snake was lured out by saucers of milk. 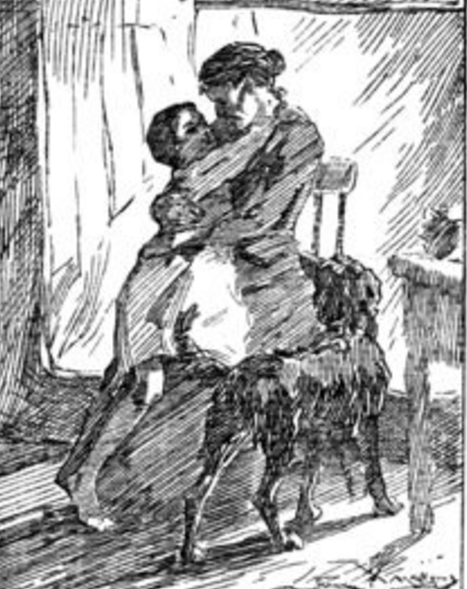 The drover’s wife waited all night for the snake to appear through a crack in the floorboards.

Now one of our neighbours was bitten by a snake, but he was also struck by lightning,  I think Mr Browne was just very unlucky. By co-incidence, he lived in Ironcliffe Road, the location of another snakey incident many years earlier.

This bizarre  incident occurred in  the summer of 1909, during harvesting….always a risky activity when it comes to snakes. The local paper, The Advocate (aka The Spud Digger), reported it with glee.

A few days ago, Mr Les. Ling, Ironcliffe-road, was in the act of pitching up a sheaf of grain when a tiger snake fell around his neck. Mr Ling hastily  grabbed the reptile, managing to catch it close to the head, thus saving himself from being bitten.  Well he thought he had saved himself. However, a fellow harvester  suddenly noticed blood tricking down Ling’s neck. In a commendable act of  Aussie mateship  he  put his arms around the stricken man and began to suck out the venom.  When he finally broke the embrace to take a breath and spit out the poison, someone else took a closer look. The wound was actually just  a scrape , with no puncture marks. It turned out that Mr Ling had simply scratched his neck with a fingernail in his panicked effort to throw off the snake.  And yes, the innocent snake was killed by a pitchfork, when all it wanted to do was slither  quietly away.

The following report appeared in the same paper a few years later;

Mrs  Gardiner, of Northdown, who was bitten by a black snake about two weeks ago, had the misfortune to again receive a bite on the same hand, this time by a tiger snake. The mishap occurred on Sunday afternoon, and she was brought to Latrobe, where Dr Stewart applied the usual remedies, and Mrs Gardiner went home on Monday morning apparently fully recovered.

Isn’t that amazing?  To misquote Oscar Wilde, to suffer one snake bite is unfortunate, to suffer two in two weeks on the same hand looks like carelessness!   What the  ‘usual remedies’ were I’m not sure. However, when I was a girl guide in the early 1960’s we were given a snake bite kit that consisted of a scalpel, a tourniquet and some  Condys  Crystals  (an  antiseptic).  The idea was to scarify the site of the bite in the hope the venom would flow out with the blood.  The tourniquet was to prevent poisoned blood pumping into the heart.  This same kit was in use before WWI. We never actually went on any bush walks, and perhaps it’s just as well.  These days, thank God,  the treatment is quite different.  In 1978 the Commonwealth Serum Laboratories announced a new technique.  A pressure bandage is   applied along the length of the affected limb  (including over the punctures)  and the patient is kept as immobile as possible until receiving  treatment with anti-venom. Could be a problem if the bite is not on a limb, but…… 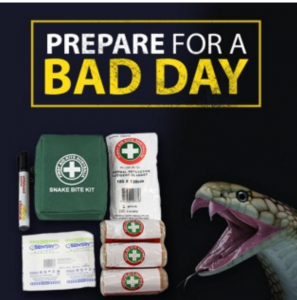 A modern snake bite kit does not include a scalpel or a tourniquet. 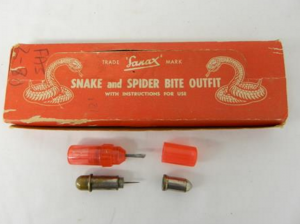 This tiny kit would also have held a tourniquet and Condys Crystals.

In the old days there were lots of snake bites in rural Tasmania due to people putting their hands down burrows while  rabbiting. Sadly, it was often children, and they were also more likely to die. One father found himself without a scalpel or  pocket knife handy when his son was bitten on the thumb. In desperation he got the boy to put his thumb over the muzzle of his rifle and then blew the top of it off.  At least the victim survived.

In the 15 years  I have lived in Blackheath, I have only ever seen one snake in the garden. My husband assures me  they stay down in the creek eating frogs, and that if they venture onto our property the kookaburras eat them. I choose to believe him, although it’s more likely that they just slither away when they hear me coming.

When a neighbor rang the rangers to report a snake on her property the response was, very sensibly, ‘Well that’s its home, what do you expect us to do?’  Of course if you find one inside your house someone will come and remove it.

DO YOU HAVE ANY SNAKE STORIES? FEEL FREE TO ADD THEM IN THE BOX BELOW. MAKE SURE YOU COMPLETE THE ANTI-SPAM SUM BEFORE PRESSING ‘SUBMIT